As usual I got up at ungodly hours because I have not adjusted. I hope not to adjust too much because I don't want to readjust too much when I return home. After the exact same continental breakfast at the hotel 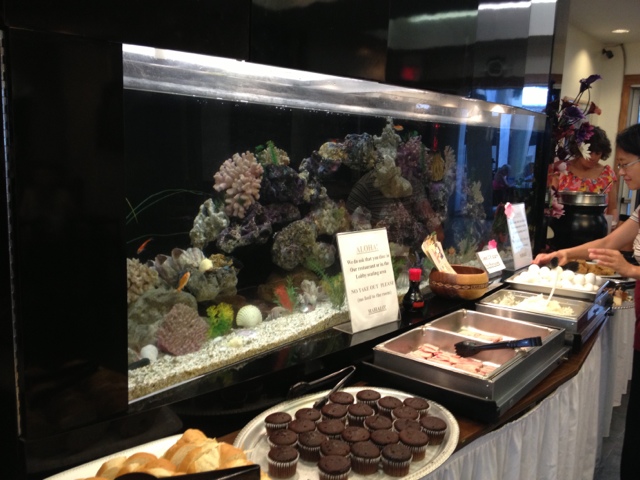 Pancakes and boiled eggs and sugar water, we walked to the bus stop. It rained as we were leaving but lightly. Near the bus shelter was a convenient store and I purchased a waterproof disposable camera. The bus showed up and we jumped on it. Except we jumped on the bus going in the wrong direction. When the driver announced the last stop we asked him how to get where we were going and he said take the bus behind. He hurried me off the bus and wasn't very informative or as kind as the other bus drivers we had encountered. I checked my trusted google app and realized we were now 1 hour from said destination. The bus driver told us where to get off to get bus 1 (near the Art Museum). We hailed a cab at 9:15 and hot to KoKo Marina at 9:45. It cost us $40. We were heading to our 10am canoe lessons. We were the first ones there so we changed and waited. 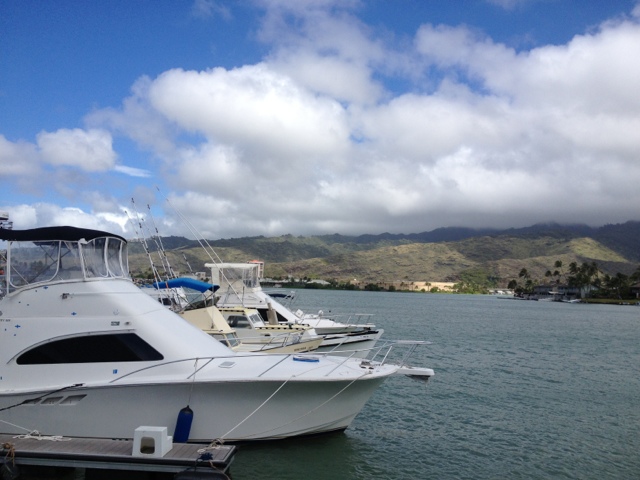 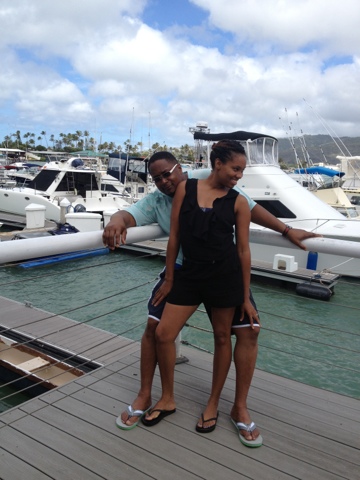 Our instructor was a beautifully tanned, tattooed, tongue pierced, and muscular Polynesian. He gave 8 of us instructions on the parts of the canoe (none of which I recall now), the paddle (shaft, t-grip/handle and blade) 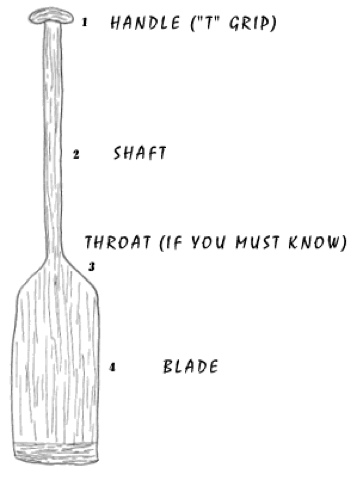 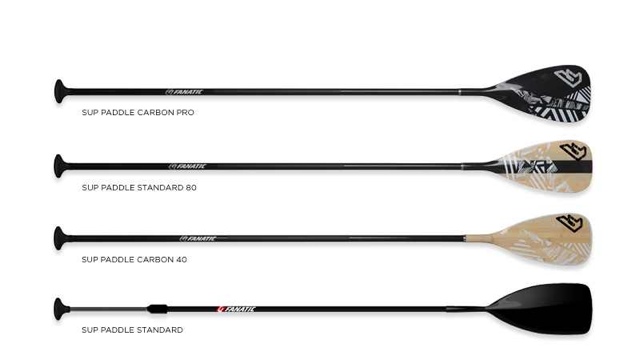 And then we set sail. Before jumping in the canoe we introduced ourselves to each other and decided who should lead, navigate and be the power of the double canoes. We told him to choose and he chose my sister and Kristin, an Asian student to lead, then me and Stephanie, Krustins younger sister, followed my mom, the third sister and the two guys Matthew and Gabe and then the instructor who took photos and give directions (hut to change sides and stay to rest). It was quite a work out and I got quite the sunburn. We took 2 breaks in the bay. On the first break a storm came and washed us clean and then it was all sunny again! We learned about how an active volcano and a tsunami created the Hawaiian islands and that each island is about 10,000 years apart in age. There are 8 islands and one is currently being formed under water. As each island drifts from the hot spring it becomes smaller and smaller due to erosion. We learned about native and foreign vegetation and many myths were broken. For example pineapple and macadamia isn't native to Hawaii. Learned about the origin of the sign they use to say hello which really means "we are the same" to remind natives of where they came from (a culture that sailed with fancy tools but used their fingers to measure degrees of the horizon).
On the next break we passed the shooting of Hawaiian 5-O!! We learned some anthropology. He told us that all the people from Taiwan, Philippine, natives of New Zealand, Papua New Guinea and Somoa were blood relatives. He told us the history of two different groups living on the island in peace and creating what is now known as Hawaiian. He told us of the effects of British colonization (bringing pine tress, mongoose, cockroach, Mosquitos and disease, Christian education, the first bank and hospital). Also learned why the people are so big and tall (self selection. Choosing biggest n strongest men and women on voyages lead to even bigger n stronger offspring).
We headed back, took more pics, got more lessons and then we encouraged to buy tshirts and other souvenirs. I bought the cd ($30, really $15 bc I'm sharing it with my sister).
We were famished and went to zippys but hated what we saw. It was the most mixed up fast food restaurant (burger, hotdog, noodles). We were recommended to go Fatboys. Man we got a lot of food that wasn't that good. We went to Jamba Juice to detox lol. I got a green juice (apple n veggies). The others got fruit smoothies. 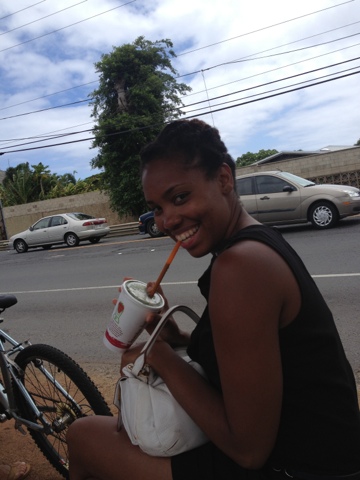 We headed to the bus stop and waited over an hour and it never came. So we took another bus and connected else where. This guy told me about this app called Da Bus, which gives live satellite feed about buses on route. It was pretty neat to see the bus moving along the map and arriving when it said it would. 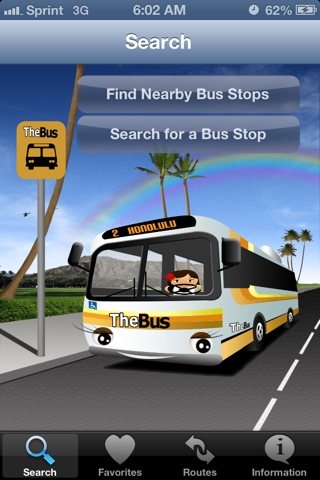 We saw some beautiful houses and ocean views. It reminds me so much of Jamaica. We went home and showered and took the bus to the Aloha Live Show at a fancy hotel called the Queen Kapiolani Hotel. The show was a circus and a luau. There was juggling, singing, acrobatics, hula dancing and fire handling. 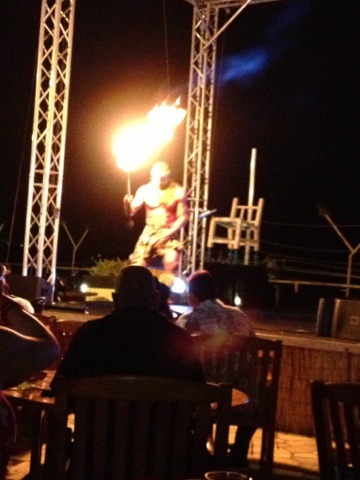 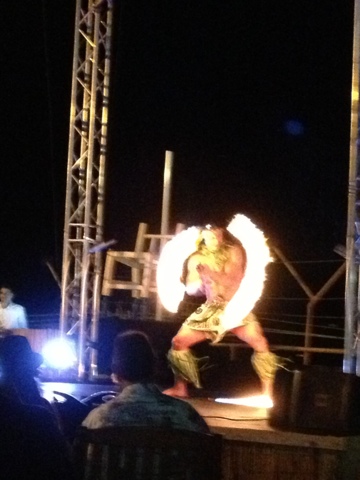 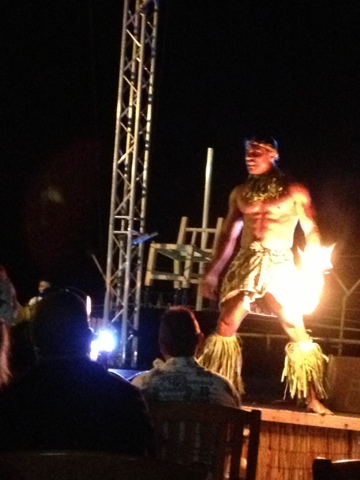 It was  really windy. It was not what I expected but made for an enjoyable experience. I feel like I have has more of an authentic Hawaiian experience now. Wouldn't be complete with hula dancing!
We walked back to the hotel. Everything (hotels, zoo, aquarium) are in walking distance once you know where they are. The activities are further though. Those you definitely need a bus or really comfortable walking shoes and an early start.
It was a great day!
For more travel tips from Dr. Melissa-Sue John, subscribe to our newsletter or follow us on social media: Instagram or Facebook.
Share Share on Facebook