The longer I stay here the more I fall in love with Hawaii. Yesterday was the best day of our vacation in every aspect- food, transportation, scenery, weather, and experience. 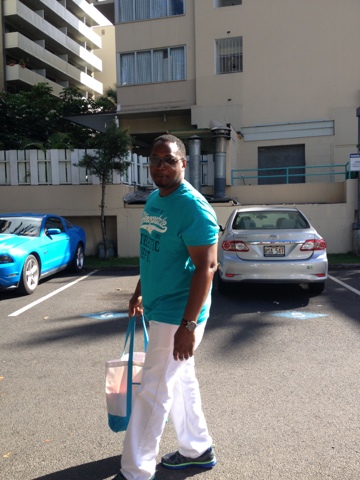 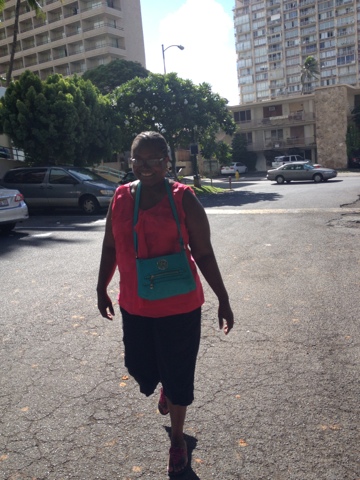 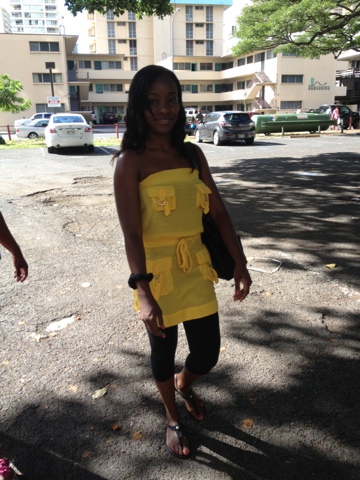 First we skipped the continental and went to Ihop. Mom n Matt had steak omelettes, Mel and I had the Belgian waffle combos. 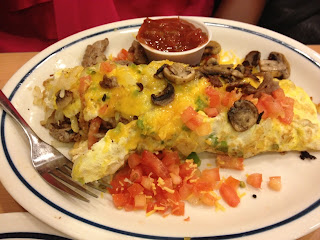 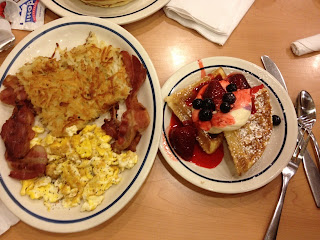 It was delicious and filling and our server Willa was very nice and tolerated all my quirks. I asked that I had eggs from the shell and not from the carton and well done close to burnt. My sister and I hate wet eggs. Matthew got 5% off our meal for being a veteran.
Then we crossed the street and took Bus 2 to Ala Monoa center to transfer to Bus 52 to head to North Shore. It was 1 and a half hours. It's incredible that you can go so far, cross highways and still cost $2.50 per person round trip! We didn't have a particular destination in mind per say. We just wanted to leave the city and see what the other side of the country looked like. We passed Dole Plantation, which happens to be the 2008 Guinness World book of records largest maze. 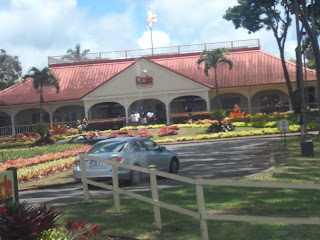 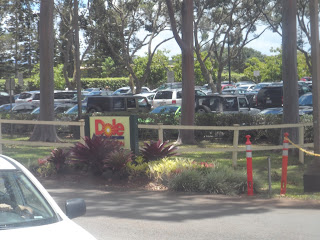 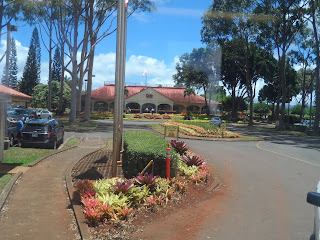 About half hour later we saw the ocean so we jumped off. We changed in the conveniently located restrooms and made our way to the beach. The sand was much better than the two previous beaches but there were huge brown craters in the ocean. Then suddenly we saw heads coming out of the water and realized some of those craters were sea turtles!! 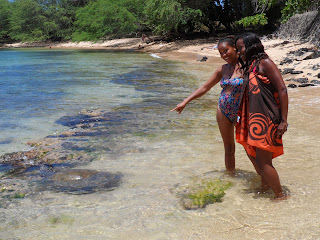 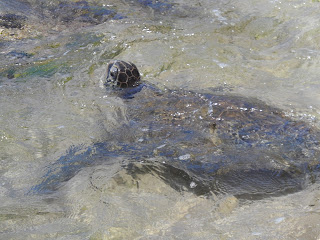 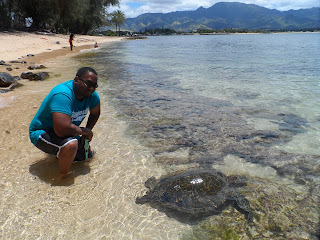 There had to be at least dozens of families. We saw adult turtles and baby turtles up and down the coast. It was such a fulfilling experience especially since my snorkeling was short of enjoyable. It's a federal law not to touch them so we went close enough for pics and then left them alone. This was the ultimate snorkeling spot. Right at the shore were beautiful fishes and people fished by a nearby cliff. One caught a trumpet fish (looks like a fish with a trumpet for a mouth) and another I forget its name. 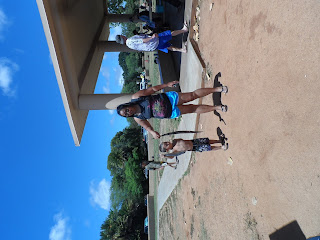 I saw miniature crabs too. 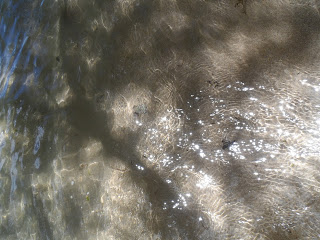 There were about 3 families enjoying the beach so it felt like our very own private beach. After we changed, we fueled up on fruit, veggies and nuts while we talked to some locals about other attractions and "turtle beach" and he said it was further up, just follow the traffic. When we got to the main road there was no doubt what he meant. Going north was stand still traffic and south the traffic jetted by. There was a bus stop in front of the beach but we hiked to the next one to get in front of the traffic. We saw the bus coming but didn't make it to the shelter in time and it had no intention of stopping for us. We passed a chicken farm and got the opportunity to try pickled mangoes. It's the same idea as eating green mangoes with salt but instead eating green mangoes soaked in vinegar, water and sugar. 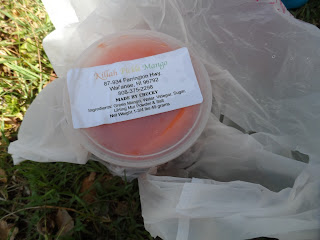 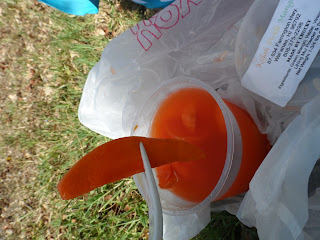 The bus came 45 minutes later and from the bus we saw the beach people raved about and realized what caused all the traffic. It was so crowded and our beach had way more turtles. So we remained on the bus and headed to Waimea. There we saw a huge beach with cliffs to jump off like Negril's Ricks Cafe. Across the street was The Valley that offered botanical garden, only waterfall on Oahu (I think) and cultural activities. 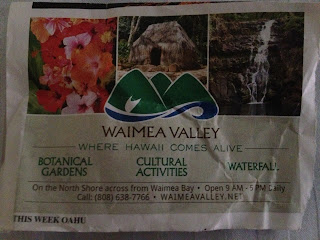 We did the hike to the waterfall and saw beautiful species of plants up the way. Mom took the shuttle. I don't know why we won't wear sneakers and carry sandals. Sandals are not walking shoes.
We finally make it to a beautiful falls. 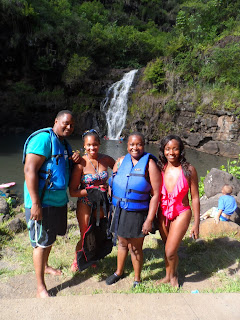 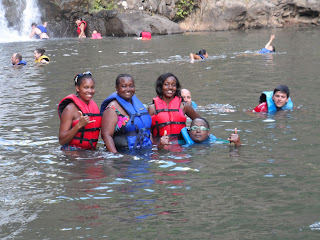 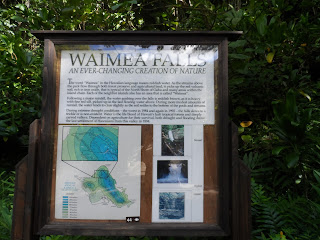 Everyone has to wear a life jacket. It's 5 ft then drops off immediately to 10 then 20. Matthew was brave and the first one out there. He climbed the fall despite the immense force of it pushing you off and dived off (which we learned after wasn't permitted). 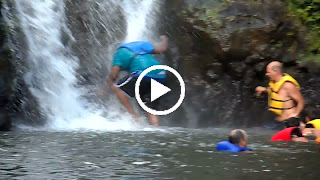 The life guards said sitting only. It was so relaxing! We took a ton of pics. Melanie also went to the falls but didn't climb. I took the pics lol!
Then we went to the beach and Matthew jumped off the cliffs. My husband became the ultimate dear devil. 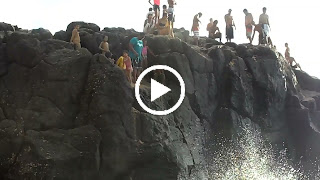 This time we carefully timed the bus by looking at the schedule using the DaBus app and when we got there it came 2 min later. We travelled back and I noticed tons of things I didn't see bc I fell asleep. We went to dinner at Dukes sister restaurant Hula Grill. Totally pricey and not necessarily great. Melanie and I ordered the special- two fishes prepared differently with blue mashed potatoes n veggies- delicious!! Matthew ordered a tasteless baked chicken and mom got a burned macadamia crusted pork chop. The waitress was nice n said don't eat anything you like and switched moms. But Matthew being a sceptic thinks unnecessary ingredients come back in your food when it's returned due to disgruntled chefs or servers lol (eg saliva). 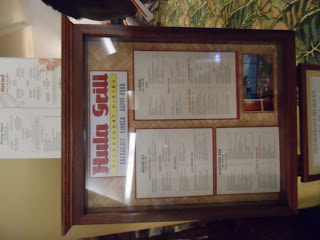 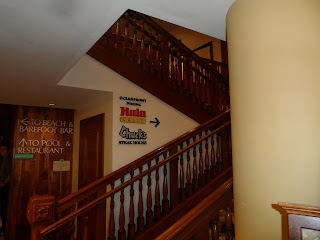 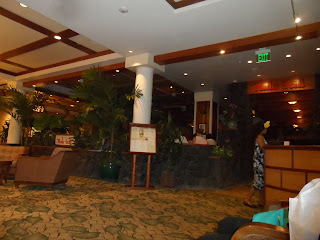 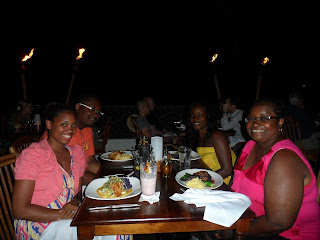 After dinner we walked on Kalihia which is parallel to Kuhio where we take the bus. Totally and completely opposite. This street had street entertainment and the strip was laced out with Gucci, Ferragamo, Bebe, the best Forever21 store I had ever seen, MaxMara...you name it it was there. Top of the line restaurants. Think rich, expensive, beautiful, luxury....envy, wishful thinking, jealousy, born in the wrong family, privilege...just kidding!!
The freaks do come out at night! Back on Kuhio Street on one side of the street was religious people shouting Jesus saves and the other end a line of prostitutes, men dressed as women, loud music, clubs, karaoke and I heard Lady Saws song "under the sycamore tree" and I think maybe a Snoop song with reference to his dick, I don't know. So that was yesterday. From the south to the north shore and back...
For more travel tips from Dr. Melissa-Sue John, subscribe to our newsletter or follow us on social media: Instagram or Facebook.
Share Share on Facebook